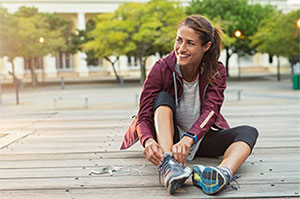 Hip arthroscopy is a cutting-edge procedure which allows your doctor to look inside your hip with a miniaturized camera inserted through a small poke-hole incision. Repair of torn or injured structures as well as removal of bone fragments, scar tissue and debris from within the hip joint also be possible using this procedure.

The minimally invasive technique of hip arthroscopy has revolutionized the treatment of many hip conditions such as femoroacetabular impingement (FAI), snapping hip, and sciatic nerve compression.

Most of the drawbacks associated with traditional hip surgery such as postoperative pain and a long recovery period can be minimized with hip arthroscopy.

Here are some of the important benefits of hip arthroscopy:

One of Dr. Domb’s patients who benefited from hip arthroscopy was a young patient in his 20s who had been limping for about a year due to a very bad hip injury. He had a lot of pain and had been through a whole lot of different doctors but was unable to diagnose the problem despite multiple X-rays and MRIs. Using hip arthroscopy to view the inside of the hip, Dr. Domb was able to diagnose a gluteus medius muscle tear in the hip that is fixable problem. The problem was fixed, and the patient was able to return to his active lifestyle.