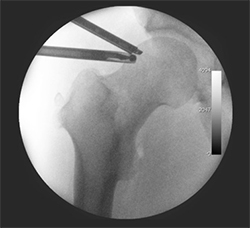 One surgeon…1, 155 arthroscopies. Benjamin Domb, M.D., founder of the American Hip Institute, recently presented his clinical outcomes study at the American Orthopedic Society for Sports Medicine (AOSSM). This study represents the largest series of patients undergoing hip arthroscopy by a single surgeon. Dr. Domb tells OTW, “Hip arthroscopy is a relatively new field and is still finding its place in the world. In the first few years there was an understandable amount of skepticism about the procedure; as the field evolves, clinical data is critical to establishing its role. For this study, all of the primary and revision arthroscopies were performed from February 2008 to June 2012, and then we conducted a two-year minimum follow-up. After exclusions, we ended up with 328 men and 593 women in the study.”